On the afternoon of 3 November, two field trips will introduce agricultural landscape, export promotion activities and historical places of Uzbekistan. Both field trips are free of charge for registered conference participants. Participants may choose between two options according to their personal and professional interest:

Details on these two tours are given below. Please inform us about your tour choice upon conference registration on 2 November at the help desk of the Samarkand Conference. We organize buses leaving from Samarkand Agricultural Institute on 3 November at 15.15.

Note: Please do not forget to wear suitable (comfortable) shoes to the sightseeing events. For specific tour details, you can inform yourself at the registration desk upon signing up for the specific event.

"Ohalik oltin bogi" farm is a farm located in Samarkand district with a total of 750 hectares of land, where different types of apple, cherry, peach and other fruits are grown. This farm is specialized also on processing and exporting fruits to neighboring countries.

"Sam Prom Xolod" Ltd is one of the largest exporters in Central Asia and grows a wide variety of fruits and vegetables. The company achieved to produce a high quality of products and to expand the product range by more than 150 items.

Guri-amir Mausoleum - one of the most significant architectural ensembles of medieval East – the Gur Emir was built in the southwestern part of Samarkand at the beginning of the XV century.

Registan square - Translated from Uzbek, “Registan” means “a sand place” because in ancient times, this central square was covered by sand. The territory was not initially surrounded by madrassah; those great buildings appeared rather later. In the past, one could see many trade rows around the square, where artisans and farmers were selling their goods. All main roads of Samarkand led to Registan where it was always noisy and lively. There are three madrassahs on the square: Ulughbek, Sherdor and Tilla-Kori, which are the main sights of the city.

Bibikhanum mosque - The majestic blue domes of the Bibi-Khanym Mosque are an unusual sight. It takes one’s breath even from understanding the scale of construction of this monument, impressing with its size and beauty. In antiquity, the dome of this mosque was compared with the dome of heaven and the arch of portal – with the Milky Way. The mosque is next to a famous oriental market – the Siyab market.

Siyab market - Siab Bazaar is a dekhkan (agricultural) market, at which mainly vegetables and fruits grown in Uzbekistan, as well as local hand-made products are sold. Trading rows are conditionally divided according to types of goods. Local sellers say that Siyab dried fruits, sweets and nuts are so tasty that residents of the capital city travel here specifically for their grocery. It is also possible to find a large selection of different spices at the bazaar, even the rare ones. Apart from the food, you can buy handicraft products from local artisans and masters.

Ulugbek observatory - Among historical monuments of Samarkand, the observatory takes a particular place, constructed by Ulugbek in 1428-1429 on one of the hills on height, at the bottom of Chupanata altitude. The observatory was a unique construction for its time. The basis of observatory was giant goniometer vertical circle), radius of circle was equal 40,212 meters, and the length of arc was 63 meters. The main instrument-sextant was oriented with amazing exactness by line of meridian from south to north.

Afrasiab Museum - located in the northern part of Samarkand, round central bazaar, near the hills of the ancient settlement of Afrasiab. The museum's exhibits illustrate the history of Samarkand’s development from the time of the conquests of Alexander the Great. The findings discovered during archaeological excavations at Afrasiab, each of which belongs to a different period of the settlement history, are one of the most valuable artifacts of the museum. These include ossuaries, fragments of ancient swords, knives, arrows, coins, pottery and frescoes of Samarkand palace belonging to the Ikhshidid dynasty (7-8th centuries). The most valuable exhibits of Afrasiab museum also include unique pieces of wall paintings dating back to the 7-8th centuries, depicting hunting scenes and holiday celebrations.

Shaki-Zinda necropolis - consists of rows of refine sparkling blue colors tombs. Harmoniously combined in a lively and moving composition, various mausoleums are grouped along the narrow medieval streets. Shakhi Zinda consists of eleven mausoleums, which were built one after another between the XIV - XV century. A unique ensemble of ancient tombs (1370-1449 years) is located near Afrasiab settlement. 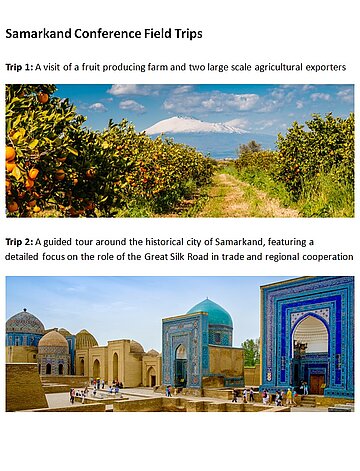