The conference entitled "Regional and International Cooperation in Central Asia and South Caucasus: Recent Developments in Agricultural Trade" will be held from 2 to 4 November 2016 in Samarkand, Uzbekistan.

Agricultural trade in the Caucasus and Central Asian (CCA) countries is highly dependent on regional markets, and particularly on Russia. Close trade relations within the CIS countries are mainly explained by historical ties, common borders and languages, as well as agricultural specialization inherited from the Soviet Union. However, substantial changes have occurred in trade policies of the CCA countries during the last 2-3 years. Expansion of the Eurasian Economic Union, accession of several countries to the WTO and trade tensions between Russia and the western countries play an important role in determining the directions of agricultural trade in the region. The trade-offs emerging from these developments and the implications for the CCA economies are not yet fully understood because evidence is limited. The aim of the three-day conference is to mobilize the research capacities in the CCA through the exchange of knowledge and research findings among regional and international experts. 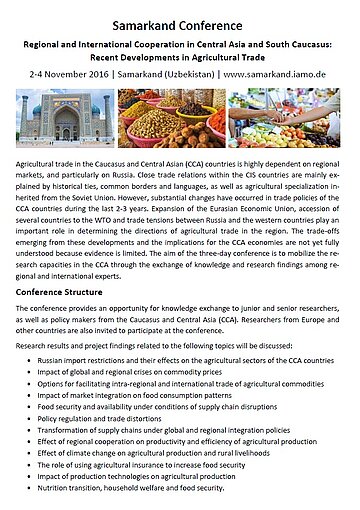